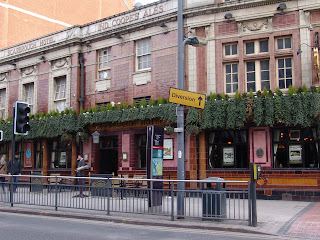 Known to Loiners as the "Scarborough Taps" this pub was, for many years, the nearest pub to Leeds City Station and hence was popular with thirsty travellers. In recent years two pubs have appeared within the station itself and the Leeds Taps is on the approach road. I have been going into the Scarborough for many years under various management and have mixed memories. Lately it has been a civilised watering hole when the city centre is getting a bit lively. When I heard that it was now being managed by Nicholsons (of Victoria Hotel fame) I thought that I had better re-visit this famous old pub. 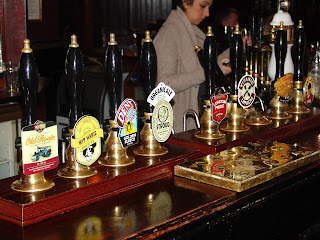 My first impression was: A good selection of ales on the bar, big drinking space, lots of seats and tables. After perusing the pumps I elected to try a pint of bitter from Dent brewery: 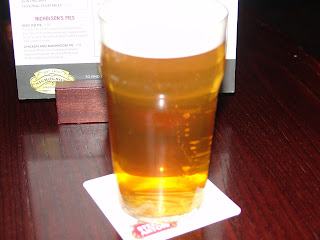 A good choice as you can see, a golden beer with a fine head. Mmm - second pint same as the first! 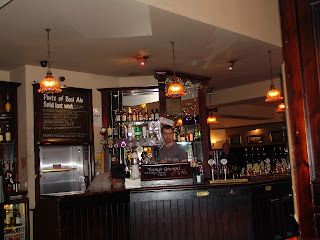 It was a Sunday lunchtime when I called in and although I was not partaking there was a steady stream of plates piled high with pub grub emanating from the kitchen. Prices start at around £7.50 which is good for a city centre pub and there were at least 2 veggie options. The Sunday drinking crowd were in good humour which made for a nice atmosphere, helped by the dark wood panelling and soft lighting. If I had had more time I could easily have been seduced into a long happy session.
Nicholsons seem to have got it right with the Taps, decent ale in a convivial atmosphere. A good pub to visit if you are travelling from/to Leeds and if you are a discerning quaffer. 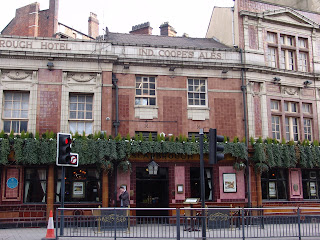 Long may it continue to thrive!

Posted by The Tykester at 01:08 No comments: