Traditionally, in the north of England men went to the pub on Saturday lunchtime, had a few beers and then went to a football match. We decided to do exactly that with an away day trip to watch an FA cup qualifying game in Harrogate.

As part of my research before the trip I had to find a decent pub between the railway station and the football ground in Harrogate. I am not a big fan of pubs with silly names such as the "Crusty Badger" so I  was pleased to find a pub, close to the station, that goes by the name "Harrogate Tap". I say close to the station but it is actually  part of the station and if you can spot the door then you can  access the bar from platform 1!

We were not that  sharp and made the 20 yard trek from the station entrance to the front door of the Tap . 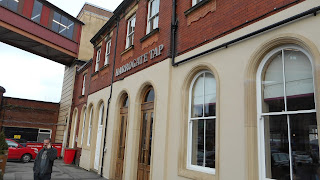 My first impression of a pub is usually my lasting one. As we walked in  I was aware of lots of stained wood and two ranks of wickets on the bar. So far so good! 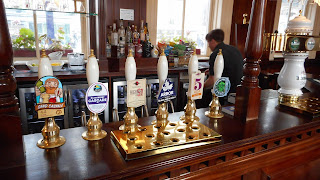 It was at this point that I encountered my first problem - more that 10 different ales and stouts on offer, many of which I had not come across before. What to start with? The barman quickly realised that we looked overwhelmed by the choice facing us and asked what our preferred style of beer was. My mate asked for a blonde and was offered several to choose from. I went with a pint of dry hopped stout called "The devil made me brew it" from the Arbor brewery at 5.5%. 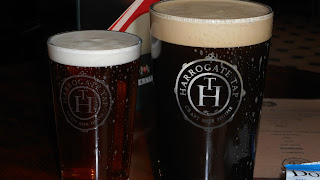 What a good choice that was. "Where is it brewed?" I asked our barman. "Er down south " said the barman. After consulting his phone he announced that it was from Bristol. As we enjoyed our first drink I was able to take in the ambience of the bar. As you might expect with a station bar there were plenty of comings and goings as people went to catch trains or got off them. One slightly disconcerting feature of the bar is the windows behind it which overlook the platform. Everytime a train went past it gave the impression that the wall was moving. 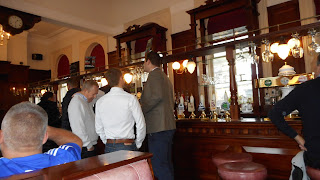 I sank my pint of stout and tried a tried a more tradional bitter for my second drink. This was a pint of Sandcaskale  at 4.2% and was described as a dark copper ale. Another nice brew from the Box Steam Brewery. 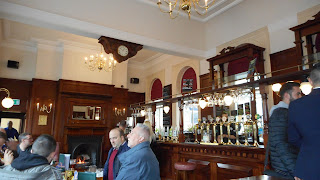 For my third pint I selected a pale beer from Oakham Ales of Peterborough called Citra. This beer, launched 5 years ago uses only the citra hop which does make it a very tasty and thirst quenching brew. It is the one on the left in the photograph. 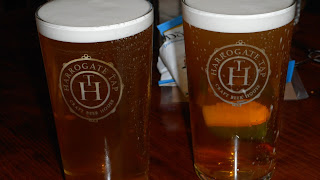 It was a lovely mild autumn day when we visited the Tap. Had we arrived mid-winter the open fire at one end of the bar would have ensured that we received a warm welcome. 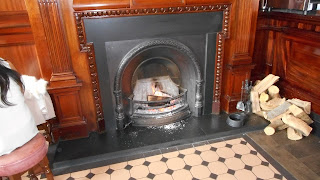 As it was after 3 very nice pints of beer I was feeling quite at home and was ready to forego the football  for a few more pints of what the Tap had to offer. I was persuaded otherwise and went off to the match happy in the knowledge that we would have to return to get our evening train back to Leeds.

What a splendid find the Harrogate Tap is. If you are in town then I suggest that you call in and sample the lovely beers on offer. If you are inclined to go by train you will have the convenience of dropping off the platform straight into a comfortable and welcoming bar. What more could you want?

Posted by The Tykester at 03:44 No comments: