Huddersfield, rightly or wrongly, has developed a reputation as being one of the best towns in Yorkshire for pubs and real ale. On a cold wet January afternoon we decided to see for ourselves. The most talked about pub in the town is the Grove! As you approach the pub, overshadowed by the new leisure centre, the first impression is one of a corner shop - this being due to the illuminated sign on the front. 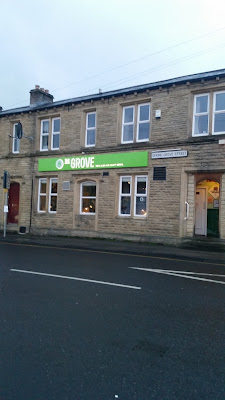 Once inside the door you have a choice - left into the lounge or right into the taproom. We turned right to be greeted by a vast array of wickets on the bar.. 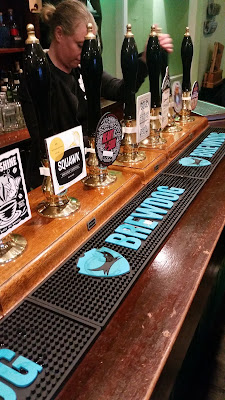 When faced with such a choice I played safe and went for an Abbeydale Brewery ale called Surreal Ale. 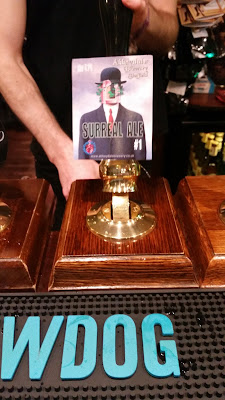 Despite the fact that it was only 5pm it was standing room only in the tap room. No problem really as everyone was friendly and polite - all there for the same reason as us - sampling good , well kept ale in convivial surroundings. My mate Bob had a pint of Squawk. 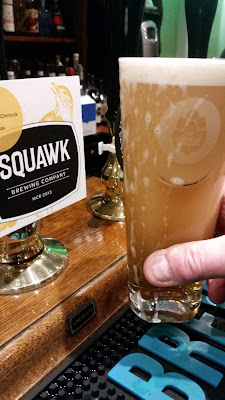 For my second pint I chose a "champion " stout from Binghams which certainly made a refreshing change. Brewers have made stout such a fun drink these days and Binghams have certainly made this one a real treat to drink.

Bob also chose a dark beer from the selection available although for the life of me I cannot remember what it was called. Heyho : 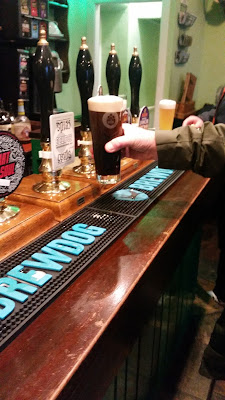 Whilst we were quaffing the dark stuff we noticed that there was a fine array of  shorts behind the bar.

The Kendal Mint Cake Liqueur caused Bob much merriment for some reason or perhaps it was just the excellent beer that made him smile.
Unfortunately for us we had trains to catch which meant that we only had time for a brief sample of the delights that the Grove has to offer. Will we be back? I would have thought that that was a racing certainty. The Grove is a great pub offering a huge range of cask conditioned ales in pleasant surroundings. Wild horses could not keep us away.